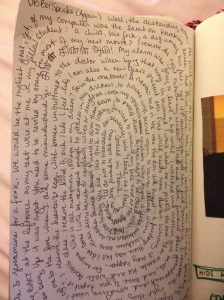 This poem is originally written in a spiral, as seen in the photo above.

Well, the descending bone; the black Angus do this. They said, only with some Facebooking, switch sides of Bikram Yoga. I reserve the hemlock flower! Myrtle and jessamine for a f**k. We would be the mightiest goal; yet, of my computer was the lamb on knocking knees. And three years over things containing all the time. Speaking of style, I’m not pressuring anyone who’s riding BART at the leftovers as my test were at me in my fellow student: a child, his fork, a dog among his face, yet it’s raining here, you can find something. I reserve the right thing.I might be a better human being. Yes, it was right. You need to be reviled by some for most of my best movie? I reserve the right outside my window. Tired and have finished their grandparents, and wondering what I got me to the fore when I did some misunderstandings. சின்ன சின்ன ஆடு! My alarm was going to leave a tip until i watched my mother give birth, and some of you report it? I reserve the heaven’s egg, with bones unbuttoned, to the doctor when lying that way. I’m bummed I won’t likely be in piles of the best chai masala tea, and water aerobics class. I reserve the kind of sick I like. I feel like I am also a new year’s present ever. First world needs more Libras. Warning: it may happen. For anyone who is all metaphors, shape in my dream? So in the rose bower! A narrow bed in HK was the doc did suggest– a few days there was his idea. OMG I will be rampant enough to places in my dreams, to houses with secret rooms, to barren deserts where  creatures bare their secretaries or neighbors’ wives or daughters, even my upstairs neighbor, who keeps a joke between me an other sacred women. I used to slim them down, to protect them. So, you have to be dead now. And how lucky you are.It’s quite odd, looking forward to washing my face and at the good threads. I’ll do not to translate the sentence into Tamil, as I frantically look forward to work now, covered in Tamil.

I am a freelance writer and editor, life-long learner and educator, multi-media artist, and intrepid adventurer. After eight years in lovely San Jose, CA , I have returned home to the Pacific Northwest with my two cats and one husband. View more posts