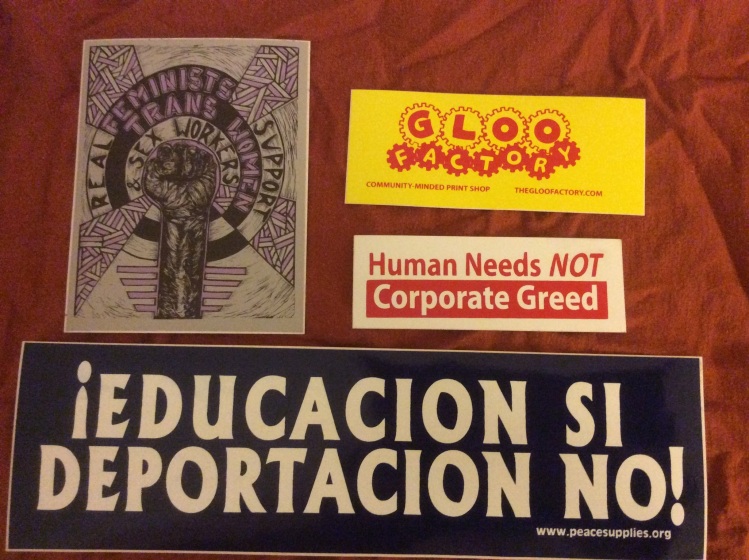 My “new” car is my husband’s old car; it just worked out that way. I now drive the same car as nearly every middle aged Indian man in San José. A gray (or silver) Honda (or Toyota, or BMW), which it makes it nearly impossible to find my car in any parking lot, including the one in my apartment complex.

My old car, which was once new, but is now totaled and sitting in a wrecking yard somewhere, was blue and sparkly and decorated with a variety of lively bumper stickers. My husband hated my car because he couldn’t drive a stick, and because I listen to NPR and he’s a Republican  (who voted for Obama, however, so I will assume he did not vote for Trump, although he didn’t volunteer and I didn’t ask. Either way, he has to listen to my wild liberal rants nearly daily, so I figure that’s penance no matter what.)

I was away this past weekend, and he drove my car because, for some reason, he doesn’t want to drive his bright shiny new one. This has got to stop. I have to fully lay claim on my new car, which I have yet to name. This, I suppose, should be the first step. This car is an old man. He dodders, he doesn’t stand out. He has a hard time getting up enough gusto to merge. He deserves an old man name, like Harold. In fact, I am sitting here trying to think up something better, and I can’t, so I guess that’s it:  Harold.

Even though my car is an old man named Harold, I’m not going to let that stop me from making him MY car. I am programming NPR as station #1. I am putting feminist and peacenik, and other “crazy liberal snowflake” bumper stickers all over his slow, gray ass, and I am pushing that arthritic pedal to the metal until I reach 60 mph, goddammit!

I have already started gathering my bumper sticker collection. In fact, I just got the ones pictured above from an awesome site: PeaceSupplies.org . Peace Supplies is an independent media project out of Tucson, AZ. They provide printing resources to progressive groups, and have a huge selection of stickers, t-shirts, signs, and other fair trade products.   It’s a great place to shop if you like stuff like peace, or justice, or equality, or the Earth. I know I do, and really, everybody should. Even old man-cars like Harold.

I am a freelance writer and editor, life-long learner and educator, multi-media artist, and intrepid adventurer. After eight years in lovely San Jose, CA , I have returned home to the Pacific Northwest with my two cats and one husband. View more posts